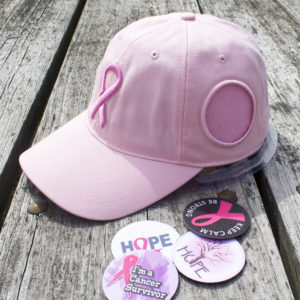 To celebrate its 70th anniversary in 2017, Penn Emblem Company focused on giving back to the community. Since its incorporation in 1947, one of the core values of the company has been “To do the right thing” which all employees and processes are expected to abide by every day. Penn Emblem Company focused on several charities and causes throughout the year with fundraisers and volunteering. Read below for some of the charities and organizations that Penn Emblem contributed too last year.

In honor of Breast Cancer Awareness Month this past October, Penn Emblem Company held an entire a month of “Dress Down Days.” During this time employees paid a small fee if they wished to wear jeans and sneakers around the office. The money collected from this event was donated to the Fox Chase Cancer Center, which supports breast cancer awareness research. Penn Emblem employees raised $1,200.00 throughout the month. The company matched the donation and a grand total of $2,400.00 will be donated to Breast Cancer Awareness.

As a woman owned business, Penn Emblem Company feels a social responsibility to give to this worthy cause. The company has several employees who have had Breast Cancer or had family members with the disease. If you are interested in learning more about the Fox Chase Cancer Center, check out their website, here.

Penn Emblem Customer Support Specialist, Rick Dunn, felt so inspired that he adopted one of the dogs as part of his family.

The Program provides knowledge and support for greyhound dog adopters and other adoption groups to educate the public and spread awareness about greyhound dogs. This program also provides specialized medical care that specifically targets greyhounds as well. If you are interested in learning more, visit their website, here.

Penn Emblem Company also participated in several awareness campaigns throughout the month by selling products to raise money for a variety of different causes. In September, Houston, Texas was hit with Hurricane Harvey, one of the largest and most costly hurricanes in United States history. To support the cause, Penn Emblem Company sold its Texas flag stock patch to its customers donating the proceeds to the Hurricane Harvey Relief Fund.

During the month of October, Penn Emblem Company teamed up with SelectPatch to sell caps with interchangeable patches to benefit the Fox Chase Cancer Center. The caps came with four different designs that customers could change out designs for a fresh look.

Penn Emblem prides itself on sticking to its values: “Do the right thing. Do things right.” As a family owned business it’s important for the company to give back to the community it serves. To learn more about Penn Emblem is up to, check out our News and Events page, here.

Created On February 9, 2018 by Rita Leybelman