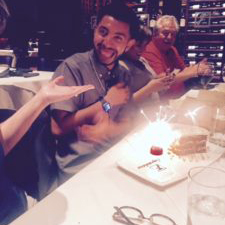 Penn Emblem would like to congratulate Jose Ramos on being promoted to Direct Embroidery Customer Support Lead. Ramos arrived at Penn Emblem Company in 2013 to work in the Ink Jet Department and after a few months, he was moved to the Shipping Department. Interested in expanding his skills, he dedicated his time within the department to going above and beyond expectations. Due to his hard work, he was soon promoted to become a Direct Embroidery Customer Support Representative. Ramos explored all of the ins and outs of this position learning as much as he could.

“Our Plant Manager approached me and offered me the position,” Ramos states, “Once again I saw this as another opportunity to expand my knowledge. I accepted the position and worked as hard as I could to learn as much as possible.”

Through his experience, Ramos has learned to keep balance and utilize his team to streamline all of the daily work that needs to be done. These are skills that he intends on bringing to his new position and moving the department forward.

We congratulate Ramos on his promotion and look forward to seeing what his expertise will bring to the position.